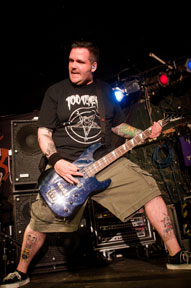 Lawrence, Kansas’s Iron Guts Kelly was formed in 2002 by Sean Riley (drums) and Shawn Reynolds (bass). Sean and Shawn have known each other since the late 1980s and in the early 2000s they found themselves playing in a pop punk band together.  Having played in hardcore bands in the past Sean and Shawn decided they wanted to return to hardcore and create a band that was musically powerful with in your face lyrics…  Iron Guts Kelly was born.

Shawn enlisted friend and coworker, Josh Leon on guitar duties.  After only a few weeks Josh’s childhood friend Robert “Boj” Stevens was brought in on vocals. Since its inception Iron Guts Kelly has released five CDs and have toured the midwest, northeast and southwest. 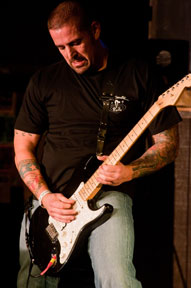 2012 marks the tenth anniversary of Iron Guts Kelly.  Most of 2012 will be spent writing their sixth studio album and a summer tour.